At last night’s PG&E “PSPS” Open House in Walnut Creek, I was able to talk to several experts from PG&E.  I believe my personal odds of being without power are much reduced, based on what I understood about the availability of power near me.  However, depending on where you are, it may not be relevant to you.  But since I do have immediate neighbors, and it is illustrative, I’m making this short post.

The blue stars on the map represent a substation.  The one in Walnut Creek is actually two of them.  Right off the bat, it looks to me like people served by the one in Orinda have a high risk of outage.  I don’t know where their power comes from, but it appears to pass through dangerous wildfire areas, exclusively.

Because there are a couple of power generating plants in the industrial coastline of the Sacramento and San Joaquin river delta near Pittsburg and Antioch (I forget exactly where, but north of Highway 4 on the map), and one or both of these supply the Martinez substation, and I live nearby, my power supply may be safe.  It follows the coastline, outside wildfire high-fuel areas.

My confidence level is now higher about this, but not certain.  For one thing, I only got this information from one person at the PG&E Open House, and for another, I wasn’t asking for certainty, just for a broad explanation.

The substation does not generate electricity, it just distributes it, locally.  Assuming that the blue stars mark all of the nearby substations, the Martinez substation most likely supplies me in Pacheco (below the word “Martinez” on the map, because it’s the closest to me.  (Actually, I won’t assume the blue stars are substations, I’ll assume these are the cities which have a substation.)

A number of transmission lines follow the coast from Pittsburg, past Port Costa, Crockett, Pinole, and Rodeo, toward Hercules and Richmond.  You can see them from Highway 4.  Not only do they run along the strait, but some of them run inland, into Briones (high danger).  Presumably they feed the cities along the East Bay hills, like El Cerrito, Albany, and Berkeley.  (I know El Cerrito has a substation, that gets power from more than one direction resulting in potential for partial outages nearby.)

It’s possible (I don’t know) that the Martinez substation gets power from the transmission lines crossing from the north, too.  Also scattered about are small solar farms, though as noted elsewhere, most rooftop solar shuts off when the grid is down.  Solar farms only produce when the sun is shining.

Power even nearer me

I’m eagerly awaiting the upgrade of my rooftop solar so that my system can be on during a grid outage when the sun is shining.  I already have a couple of batteries, but I’m not sure it will be economical to add enough to get through a whole night.  I’m just hoping to operate the refrigerator, or washer and dryer, during the day, at least!

I hope my neighbors find this interesting and/or useful.  We may not have outages, but whatever happens, we’re in it together, as I pointed out in my post, “Power Failure: The Adventure.“ 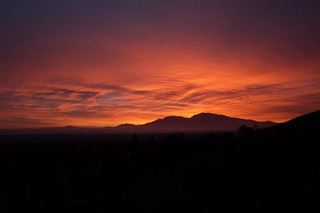